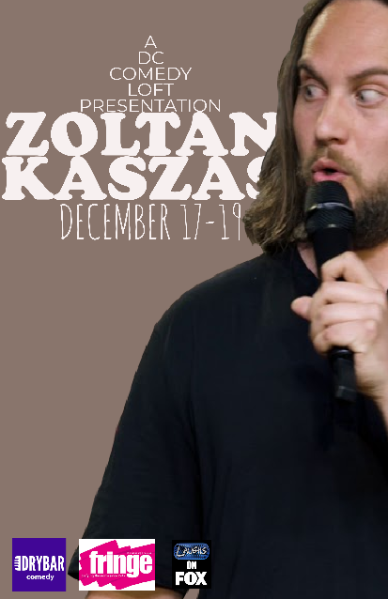 with Maher Matta and Jesse Egan

"Is that your real name?" is a question Zoltan Kaszas has heard since he and his mother moved to the US from Hungary in 1991. Eventually settling in San Diego, California, Zoltan stumbled into the world of stand-up comedy at the age of nineteen where he developed a unique storytelling style that has allowed him to travel across the country and some of the world. His comedy has been featured on television (Laughs on FOX and Punchline) on radio (SiriusXM) in print (The Atlantic) and has won him multiple comedy competitions including The Seattle International Comedy Competition, The San Diego Comedy Festival and in the summer 2017 he took his show American Immigrant to The Edinburgh Fringe Festival. Zoltan’s latest comedy album entitled “Uncle McFatfat” is available on iTunes along with his weekly podcast This Week In Zoltan which should aid his continuing campaign to end the question "Is that your real name?"

Comedian Maher Matta has been performing standup comedy for nearly fifteen years. He has appeared on FOX's "Laughs TV", performed at comedy clubs across the country, hired for private events, and placed in comedy festivals and competitions. He was also a writer and comedy sketch actor for two seasons of "Tonight In San Diego". His comedy revolves around story telling and observational humor. Maher can also do multiple accents which he often incorporates into his comedy. Maher has experience not only headlining comedy shows, but also emceeing weddings and corporate events. As a former police officer, a husband, and father, Maher brings a unique perspective to the stage!

Jesse Egan started doing stand-up comedy after a summer road trip took him from his hometown of Washington DC to the west coast. He was named part of the Best of San Diego at The Comedy Store in La Jolla California and in 2014 Jesse won first place in the San Diego’s Funniest Person Contest.

Jesse currently travels the country with Vicki Barbolak from America’s Got Talent as part of the Trailer Nasty Tour. He is the most recent host of Tonight in San Diego, San Diego’s very own late night variety talk show on CW6 TV. You can see Jesse’s nationally televised spots on KPBS TV and he’s also appeared on Dry Bar Comedy, Laughs on FOX, Union Tribune TV, Fox Rox TV, and in the documentary film Stage Time.

Jesse performs stand-up comedy all over the country and has opened for Chris D’Elia, Theo Von, Dane Cook, Doug Stanhope, Joey Diaz, Brian Posehn and many more. Jesse is part of the cast on the popular comedy/Dungeons & Dragons podcast, Awful Neutral.