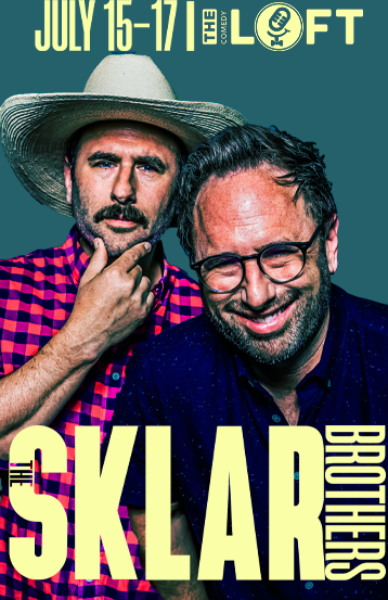 with Nate Fridson and Alison Klemp

The Sklars starred as conjoined twins in a memorable episode of GREY’S ANATOMY, and as warring agents on HBO’s ENTOURAGE, of which Entertainment Weekly television critic Paul Katz wrote, “in the hands of comedic masters, The Sklar Brothers, they made it soar.” The Sklars have also appeared in such films as Touchstone’s WILD HOGS, Fox Atomic’s THE COMEBACKS, and the popular Netflix movie TEACHER OF THE YEAR alongside Keegan Michael Key, Larry Joe Campbell and Jamie Kaler.

The Sklars also hosted the critically acclaimed History Channel docu-comedy THE UNITED STATES OF AMERICA which highlighted the ways in which statistics tell the story of the US and appeared monthly on Showtime’s JIM ROME ON SHOWTIME in their regular segment “Sklarred For Life,” where they took a humorous look at the past month in sports.

In November of 2006, Randy and Jason wrapped the fourth and final season of their cult classic comedy series CHEAP SEATS on ESPN Classic, and wrote and appeared in regular segment “The Bracket” on ESPN’s SportsCenter from 2008 to 2009. In addition, the Sklars regularly fill in as guest hosts for Jim Rome on his popular nationally syndicated radio show.

As stand-up comedians, the Sklars recorded their second half hour COMEDY CENTRAL PRESENTS special in November 2009, which premiered in March 2010. The Onion A.V. Club named the Sklars’ third comedy album HENDERSON AND DAUGHTERS in their Top 10 Comedy albums of 2011. In April 2014, the Sklars recorded and released a one-hour stand-up special and album titled THE SKLAR BROTHERS: WHAT ARE WE TALKING ABOUT on Netflix to rave reviews.

Neil Strausse of The New York Times said of the Sklars, “Their comedy accepts the reality of being twins but does not use it as a crutch. Instead they work with their physical and mental similarities and correspondences, their status as imperfect carbon copies of each other. In their comedy, the straight man is often an echo.”

Randy and Jason currently reside in Los Angeles, where they record two hit podcasts; for sports fans, VIEW FROM THE CHEAP SEATS stands squarely at the intersection of sports and comedy, boasting huge guests of both worlds, from Bill Burr to Bob Costas. Their other podcast DUMB PEOPLE TOWN is currently being developed by Sony as an animated narrative half-hour comedy co-starring Will Arnett.

Nate Fridson is a fast rising star out of the rich comedy scene of Detroit. Featuring well-crafted jokes and an inviting, accessible style, Nate’s act has been called ‘smart,’ ‘original,’ and, ‘better than it used to be’ by both peers and audiences alike. A caustic writer who ‘brings sarcasm to an art form,’ Nate shies from no subject— his material grows from deep, probing roots in the autobiographical to reveal a skewed, surreal worldview. Nate has performed at the Laughing Skull Comedy Festival in Atlanta, was a semi-finalist at the New York Comedy Contest, and recently traveled to Japan to perform for the US Troops stationed on Okinawa

Alison is a comedian, actress and writer living in New York City. She doesn’t know where she’s from because she moved around too much growing up, but she was a kid in Memphis and went to Catholic high school in Las Vegas so she has some issues. She spent a lot of time in Colorado and claims that as home, as it is also where she started doing standup. In 2015 she was featured in the New York Comedy Festival on Time Out NY’s Women In Comedy show at The Stand. Other festivals include: Brooklyn Comedy Festival, She-Devil, Laughing Devil, and THC Fest in Toronto. Alison was also a producer and performer in the inaugural Cinder Block Comedy Festival this year, which gained notoriety - and infamy - for its “77 cent on the dollar discount” submission fee for women, POC, LGBT and disabled performers.