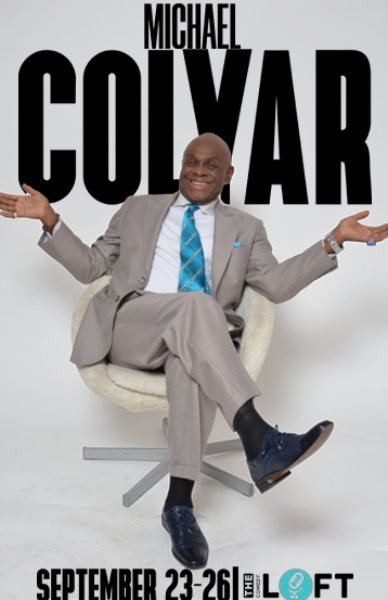 Michael Colyar is one of the funniest comedians on the planet!

Actor, standup, author, and all-around comedy legend, Michael is hard to ignore and impossible to forget.

Michael is no stranger to work as he is still packing out shows in major cities night after night. His wit, charm and unique sense of style has been captivating audiences since the 1980s. He splits his prolific career between film, TV acting and stand up shows.

Michael Colyar consistently performed every weekend, 5 shows a day on Venice Beach and was rightfully dubbed the “King of Venice Beach” while performing 9 years straight, leaving a positive imprint on the crowd with his thought-provoking humor.

A native of Chicago, Michael’s hard work begun paying off and with his comedic star on the rise, he was honored by the city of Venice by placing his shoe and handprints as well as his money grabber in cement of the new Venice Boardwalk.

He plans to do his comedy special on Venice Beach this summer where he gained legendary status as “The King of Venice Beach.”

Colyar gained national attention after capturing the Grand Prize Comedy championship and $100,000 on the popular television show “Star Search.” He donated half of his winnings to homeless charities in the Los Angeles area.

Michael’s philanthropic legacy extends beyond his $100K win from Star Search and he finds time to share laughter with those in need in shelters, rehabilitation centers, schools, and military bases.

As “The Original Host” of “BET Live From LA”, his point-blank delivery and razor-sharp insight deeply connected to its over 55 million viewers coast to coast.

The legendary trailblazer also host“Michael Colyar in the Morning,” an uplifting digital show filled with fun, funny and positivity. Welcoming people from all over the world to share their stories and talents. The ‘feel good’ show has found an immediate audience since streaming live in March of 2020.

Michael Colyar is best known for his starring roles in Blackish, House Party III, Norbit, The Princess & The Frog, and his role as Mr. Whitaker on the hit television series “Martin”.

In 2016, the comedy legend kicked off his one-man show, “Michael Colyar’s Momma,” which chronicles his life and highlights the love and support given to him from his mother as he traverses through a life filled with highs and lows. The passion project has also caught the attention of major television, cable, and streaming networks. Michael will soon return to the stage on a 100 plus city tour with the hit autobiography show.

Over a span of 30-plus years, Michael has built his television and film career working with such luminaries as the late John Singleton and Bernie Mac. He is also known for his work with Eddie Murphy, Martin Lawrence, Cedric The Entertainer, Oprah Winfrey and many more.

Hollywood is already buzzing about the electrifying performance of legendary comedian and actor Michael Colyar, as ‘Mike McCoy,’ in the romantic Christmas comedy, Holiday Heartbreak from producer Tressa Azarel Smallwood and her MegaMind Media production company.

The “feel good,’ romantic comedy is destined to be a black classic movie slated for release this holiday season.